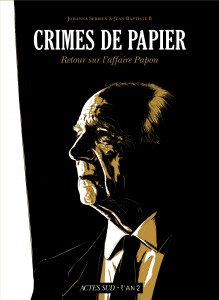 Crimes of paper, back to the Papon affair, Actes Sud/L'an 2 Publishing

1942. Arthur Gribensky escapes the arrest of his family near Bordeaux. After the war, he becomes a historian and has only one goal in mind: to find the one who ordered the deportation of his parents.

In 1981, he reveals through the press the responsibilities of Maurice Papon during the war. This is the beginning of a long legal procedure which will lead to the conviction of the former secretary general of the prefecture of Gironde in 1998.

The story, fictional, is largely inspired by the career of Michel Slitinsky, author of the book against Papon, "The duty of justice". Michel Slitinsky, now deceased, supported this project from the start by providing me with his historical expertise.

Attorney Michel Zaoui, civil party lawyer during the Papon trial, also supported this book by agreeing to write the preface.

The screenplay is based on a Political Science dissertation written under the supervision of the philosopher Michel Terestchenko, whose subject was : “The Papon trial and French memory. »

The collaboration with Jean-Baptiste Bertholom, graphic designer and draftsman allowed the publication of this graphic novel in September 2012, by Actes Sud Publishing.

When it was proposed to me to introduce in a few words the graphic novel about the Papon affair, my reaction was rather negative. Indeed, I worked for years on this file as a civil party lawyer and I could not imagine that a comic book would be able to address the many problems raised by this trial and by such an elusive personality as that of Maurice Papon. For me, such an approach could only lead to a simplified version of the appalling complexity that I had to face day after day. It seemed impossible to me to expose through this literary genre the capital questions which had tormented us, my colleagues and myself : Could we judge a man 50 years after the facts ? Could a man be identified with a Regime ? How could such a man have been knighted by General De Gaulle ? Was France an occupied country or a country of resistance fighters ? Could obedience to orders constitute an exonerating cause of responsibility ?

And then I read "Crimes of paper" and my calm certainties concerning this narrative process were somewhat shaken up. I realized that, by means of a slight fictional love story inserted into the great History, the author had been able to capture and restore this crime of ink, this crime of paper which delivered children, women and men in the gas chamber. It is not enough to say that this certain death was unknown ; Papon himself admitted during the trial that he knew that the deportees were going "towards a cruel fate"...

Even if it is well known that Nazism and its murderous madness were not a French invention and that France, it should not be forgotten, suffered the yoke of the German presence on its territory, there remains no less than we had to learn to “open our eyes” and end up accepting that there existed in France a “criminal bureaucracy”, the crime against humanity not being reducible to violence alone. It was therefore a challenge to present in this popular and direct form the terrible reality of French history under the Occupation, to have people admit without watering down the fact that our country, through the intermediary of some of its agents like Maurice Papon, had made himself an accomplice in crimes against humanity. The bet was won.

Certainly today, thanks to this trial, the victims have finally been able to express themselves. But we know that time is passing and that soon there will be no one left to testify. Only the historians will remain who will work on all the documents and on all the testimonies amassed during what was the longest trial that France has known. A book like this can be read as one of the pieces of the puzzle that the historical narrative is constantly building. Because the author was able, with emotion and talent, to transcribe the seriousness of the Papon trial and what it revealed about this disaster of the 20th century.

Lawyer at the Paris bar

Lawyer for civil parties during the Barbie, Touvier and Papon trials